Why there should be a 10th month of pregnancy

I’ve come to the conclusion that there should, in fact, be a 10th month of pregnancy. I’m not going barmy – I do realise that nine months is quite enough thank you very much – but what I mean is that the pregnancy ‘journey’ should take into account nine months ‘inside’ and one month ‘out’.

I reached this conclusion after seeing Bepanthen’s latest campaign for new mums, in which they’re highlighting the fact that as soon as a woman gives birth attention is refocused from the mother to the newborn baby, yet the first month after birth – the 10th month – is when mums actually need more support than ever. 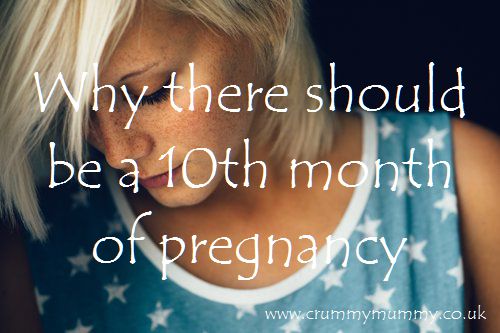 After BB was born I vividly recall lying on the bed feeling terrified as the midwife got ready to put her needlework skills to use – I’d never had stitches before, let alone down there – but I couldn’t, or didn’t, convey this to Misery Guts because he was holding BB on the other side of the room and was totally absorbed in looking after her. So I didn’t say anything and just let her get on with it, when I could really have done with some reassurance and a hand to hold.

A few weeks of sleepless nights and grappling with car seat buckles and pram frames later I remember seeing an advert on TV for baby formula with a voiceover that said ‘Mums, you’re doing great’ and it brought a tear to my eye because I really needed to hear that.

So in order to shine the light back on new mums Bepanthen has created a film with a Bafta nominated documentary maker offering a glimpse into the lives of new mums as they’re adjusting to their roles. During the film each mum is asked ‘and how do you feel?’ and every single one of them looks startled, as if they didn’t hear the question correctly and can’t quite believe they’re being asked about themselves, not their baby.

I know they’ve got a brand to promote and cream to sell, but it’s a really moving film and I like the sentiment. Well done Bepanthen!

How did you feel in the first few weeks of parenthood? Do you think the concept of a 10th month of pregnancy is a good idea?