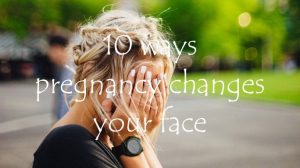 Forget Adele’s beard. Hairs sprouting on your chin are the least of your worries in pregnancy. They say being pregnant changes your body, but what they fail to tell you is the changes it makes to your face.

And I’m not talking about shiny hair and glowing skin. Both of these are Big Fat Lies they tell you to make you feel better as everything else spirals out of control.

It’s been almost five years since I became a mum and I look like I’ve aged 10. At least. And it all started with my first pregnancy. If you’re of a sensitive disposition look away now, because here’s 10 ways pregnancy changes your face and it’s not good:

1. You might grow a beard. Adele and Drew Barrymore have both admitted sprouting facial hair thanks to a surge in pregnancy-induced testosterone, and worse still there’s not much you can do about it. The only course of action is to look on the bright side. Adele says she nicknamed hers ‘Larry’ and Drew says she referred to hers as a ‘wonderful little goatee’.

2. It can make you look like you have a moustache. An increase in the skin pigment melanin can cause chloasma, which basically looks like a shadow or brown patches, on the upper lip, forehead and cheeks. The good news is it fades in the ‘vast majority’ of cases and you’re not alone – Kirstie Allsopp and Louise Redknapp are reported to be victims – the bad news, again, is there’s not much you can do about it.

3. You look like the ghost of Christmas past. Forget glowing and blooming, I looked so white and washed out in the first trimester of both my pregnancies I looked like I hadn’t seen the light of day for years. And I’m naturally quite olive skinned.

4. Baby hair appears on your head. As well as the aforementioned beard, a halo of ‘new’ hair can appear along the hair line that no amount of blow drying or straightening will tame. Mine stuck out like corkscrews for nine months and beyond, until I stopped breastfeeding when it thoughtfully fell out.

5. It can make your nose grow bigger and wider. But don’t panic, I’m not talking Pinocchio-style proportions. Increased blood flow to your mucus membranes thanks to our old friends hormones – namely oestrogen – is the cause of this one. Nice.

6. Spots. You might as well be 13 again when these babies appear on your chin, nose and temples – or, if you’re really unlucky, all three.

7. Bags under the eyes. It stands to reason that the overwhelming tiredness brought on by growing a baby coupled with broken nights owing to being uncomfortable and needing the loo will result in under eye bags.

8. Calcium deposits. As if under eye bags isn’t bad enough, calcium deposits – also known as milk spots – can appear on the delicate folds around the eye. There’s no rhyme or reasons to these, but the good news is they disappear in time.

9. Spider veins on your nose, cheeks and eyelids. Admittedly mine appeared in my second pregnancy and were therefore probably brought on by all the wine I had to drink after becoming a mum in the first place, but hormones can cause these unsightly red veins to appear.

10. You develop The Knowing Look. The Knowing Look is a glint in the eye that all mums and expectant mums develop, whether they realise it or not. The Knowing Look says I’ve left my dignity at the door of the doctor’s surgery, discussed things with midwives I could never have dreamed of and been prodded in places I never realised existed.

I’ll stop the list here as I don’t want to put anyone off.

The upside of all of this is that, all being well, you get a peachy skinned, milky smelling bundle of softness at the end of it. And suddenly all these things pale into insignificance, even if your face will never be quite the same again.

Did pregnancy change your face? Is there anything I’ve missed?

I’d LOVE it if you’d consider nominating me in this year’s MAD Blog Awards. The categories I best fit into are Best Pre-school Blog, Best Writer or (dare I say it) even Blog of the Year – all you have to do is click on the badge below and enter http://www.crummymummy.co.uk into the relevant box. Thank you SO SO much in advance! x