Being almost 25 weeks pregnant with baby number three I’ve had time to reflect on some of the things people say to you when you’re expecting.

Well-meaning things, things that are said off-the-cuff and without malice, but at the same time a tad annoying if you’re the pregnant woman in question who’s heard them over and over again. 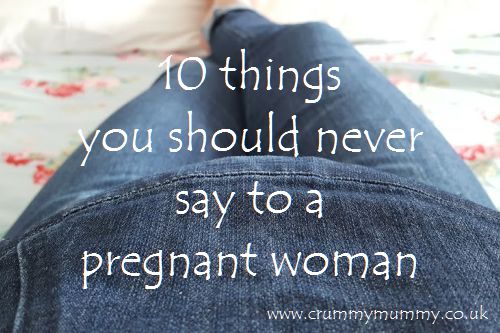 1. ‘You look tired’. Of course you’re tired. You’re growing a baby. And if you already have other little ones to look after the chances are you’re exhausted. But don’t say it and make them feel even worse than they already do.

2. ‘Was it planned?’ There’s a whole host of reasons why you shouldn’t ask this question, ranging from the fact you have no idea what went on before and to achieve the pregnancy, to the fact it’s basically none of your business. And what does it matter anyway? Just don’t go there.

3. ‘Your bump is huge!’ As if the fact your body is morphing into shapes you never imagined isn’t bad enough, total strangers commenting on the size of your belly is just rude. You wouldn’t comment on the size of someone’s belly if they weren’t pregnant (I hope!) so don’t do it now.

4. ‘Your bump is tiny!’ I’ve had comments about my bump being both big and small in the same pregnancies. Surely it can’t be both. Keep your opinions to yourself.

5. ‘It must be a boy because you’re carrying at the front’. Nope. I carried all my babies at the front and BB is most definitely a girl.

6. ‘It must be a girl’. Like the comments about my bump being both big and small, I’ve been told I ‘must’ be having both a girl and a boy. Since I’m not expecting twins I can’t possibly be carrying both, and I’m sorry but unless you’re armed with an ultrasound scanner there’s no way you can possibly know.

7. ‘It’s going by so fast!’ Time might be flying for you, but the chances are time isn’t flying for the expectant mother in question, especially if this pregnancy follows a complicated previous pregnancy or pregnancy or neonatal loss. However well intentioned, button it.

8. ‘My friend had her baby at that hospital and had a terrible time’. Why oh why would you say this? Unless you’re Victoria Beckham or Kim Kardashian it’s not as though we have a choice of five different hospitals. If you have a hospital horror story to tell do not tell it to a woman due to give birth there.

9. ‘You can’t eat that!’ Actually, I can. As if any pregnant woman is going to knowingly put the health of her unborn baby at risk. Please leave us to make educated decisions ourselves.

10. ‘Will you have another?’ Most pregnant women can’t think beyond the birth, let alone another baby. Can we be allowed to just enjoy the moment please?

Is there anything that got your goat after hearing it for the umpteenth time in pregnancy? Or didn’t you mind?