I know babies don’t come with manuals, but pregnancy should. An honest one, I mean.

I’m now in the third trimester of my third pregnancy and there are so many things midwives and people who have been there, done it and got the t-shirt don’t tell you, from the surprising to the downright weird. 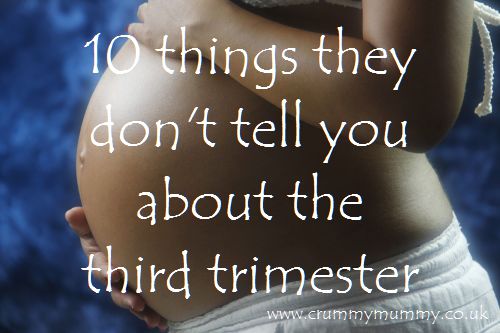 1. You can feel the baby’s head in your foo-foo, especially when you walk. Which is too weird for words. Enough said.

2. You think there’s absolutely no way the baby can possibly stay in for however many weeks you’ve got left. But they do.

3. People – from family to total strangers – keep telling you how tired you look. Of course you’re bloody tired – you’re growing a baby. Don’t they know this is one of the things you should never say to a pregnant woman?

4. You know exactly how many weeks and days pregnant you are. Whereas you lost track between weeks 20 to 30, by the time you reach the third trimester of the pregnancy the countdown is officially on.

5. Basic ablutions like shaving your bits becomes an epic job requiring a ridiculous amount of thought, effort and huffing and puffing. How can anything so simple become so complicated?

6. If you were a drinker pre-pregnancy you’re now absolutely gasping for a proper drink. To the point you actually smell other people’s in a bid to imbibe it vicariously.

7. You can feel as wretched as you did in the first trimester. In two out of my three pregnancies the nausea, aversion to smells and metallic taste in my mouth has returned with a vengeance. Worst luck.

8. Heartburn. It doesn’t matter what you do or don’t eat or what time of day you eat it, the chances are heartburn is coming to get you.

9. You can continue running longer than you think. I’ve run into the third trimester of each of my pregnancies and each time I’ve been surprised just how long I’ve been able to carry on for.

10. The baby will keep you awake at night even though it hasn’t been born yet. If I need the loo in the night I tiptoe to the bathroom as slowly and quietly as possible in a bid not to wake the baby. If I fail such is the drumroll inside it can be 45 minutes before I can go back to sleep again.

Do you have experience of the third trimester of pregnancy – either as a mum or a dad? Is there anything I’ve forgotten?