It’s the second year I’ve had the pleasure and what with the arrival of baby number three it’s by no means the last. 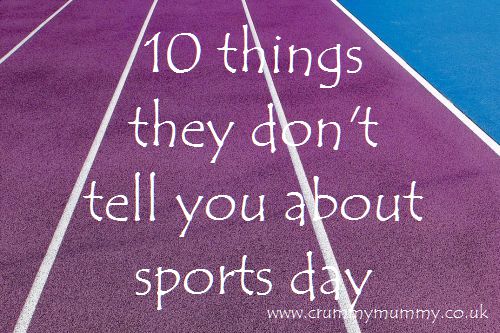 1. It sends Parent Mail into overdrive. For those of you who haven’t had the pleasure Parent Mail is the communication system between schools and parents – and you get contacted a lot. When it comes to sports day a question mark hangs over the entire event until the last possible moment when a call is finally made on whether it will go ahead based on the latest weather forecast. Which is a total nightmare for working parents, anyone with a life and your Parent Mail inbox.

2. It’s only when they send them home with their PE kit the night before the big day that you realise they’ve actually outgrown it. Their t-shirt is more cropped than is technically decent and there’s no way they’re going to win the running race in trainers like that. Cue frantic trips to the school uniform shop and Clarks.

3. ‘Remember it’s not the winning, it’s the taking part’. If you had £1 for every time you hear that phrase, or something like it, at morning drop off you could buy an extra bottle of wine or two.

4. You’ll be bored stiff. What with the shepherding of kids from one race to the next and waiting while each of them take their turn there’s lots of standing around. Or sitting if you’re clever enough to have remembered a camping chair.

5. It’s not what it used to be. If you’re expecting old favourites like three legged races, wheelbarrow races and sack races you’ll be sorely disappointed. The health and safety police have put paid to those.

6. The egg and spoon race isn’t what it used to be either. It’s now pear and spoon at our school, although I’ve got absolutely no idea why.

7. Appearances can be deceptive. It’s often the smallest ones who are the fastest.

8. It can actually last all day. If you have two or more children in different year groups sports day is just that – the whole day. With key stage one in the morning and key stage two in the afternoon some poor souls will be subjected to it for years.

9. The mums and dads races are serious business. If you thought they were a bit of fun at the end of the day then think again. Expect parents in full workout gear, elbowing throughout the race and bad losers. You can tell a lot about someone from the mums and dads races. Just like the 10 types of school play parent, it wouldn’t be too hard to come up with 10 types of sports day parent.

10. Winning is everything. Even if your school is one of those non-competitive sports day types, we just can’t help ourselves. The parents know it, the teachers know it and the kids know it. Winning is, after all, human nature.

Have you had the pleasure of sports day this year? Do you have any survival tips? I’d love to hear what they are!