10 reasons all parents should take a brat-cation

I’m referring, of course, to that rare and lesser known aspect of parenting, also known as a break away from the kids.

This week, on their royal tour of Canada, as well as tucking into willy-shaped clams (you really couldn’t make it up) William and Kate left theirs with the nanny and spent a child-free night in a hotel, prompting much speculation in the tabloids about whether brat-cations are really the done thing. 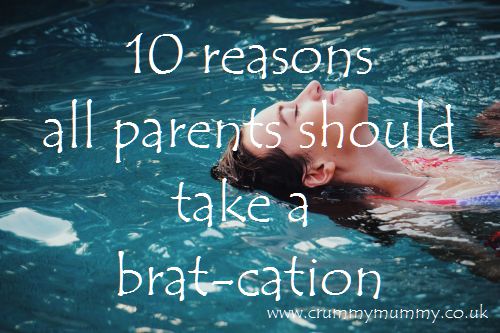 It was almost two years before I had my first night away from BB, and to be honest, what with the fact I was still breastfeeding it would have been far easier and less stressful to have simply stayed at home.

That said, Misery Guts and I have been lucky enough to have numerous brat-cations since, and even though you spend the first 24 hours totally wired and feeling like you ought to be wiping, preparing, tidying or washing something they’ve been just what we’ve needed to take the edge off and stay sane.

10 reasons all parents should take a brat-cation

1. You get to actually start and finish a conversation without being interrupted 10,000 times or asked to wipe a face/bottom/spillage.

2. You get to do basic, simple things like walk on your own and hold hands.

3. You can sit at a dressing table and take time doing your hair and make-up, leaving straighteners to heat up without fear of a visit from social services.

4. You can go out with a little handbag that doesn’t contain everything but the kitchen sink (although keep hold of the baby wipes – they’re bound to come in handy).

5. You can eat a civilized meal in a restaurant that doesn’t have a grime-encrusted play area and plastic knives and forks.

6. You’re guaranteed to be able to eat three meals a day totally uninterrupted.

7. You don’t have to empty the dishwasher or load the washing machine (just bear in mind you’ll be doing double loads for a while after you get back though).

8. You can actually talk to your other half, and I mean properly talk, instead of clarifying banalities like who’s doing what and who needs to be where and when the next day.

10. You can also be just a couple, the couple you were before all hell broke loose.

So that’s why I think all parents should take a brat-cation from time to time. Even royal ones.

Of course I don’t for a minute believe that a brat-cation is a rare occurrence for the likes of William and Kate, or that they’re in need of one in quite the same way you and I are. I don’t mind them championing the idea though.

Do you manage to take regular brat-cations? Or is the idea of a brat-cation more hassle than its actually worth?