Crafting. The mere mention of the word is enough to bring me out in a cold sweat.

I don’t know about you but in the run up to Easter my Instagram feed was full of Pinterest-perfect images of lovingly created bunnies and made-from-scratch chicks, and it’s the same at Christmas, Halloween and any other event that’s been commercialised within an inch of its life. 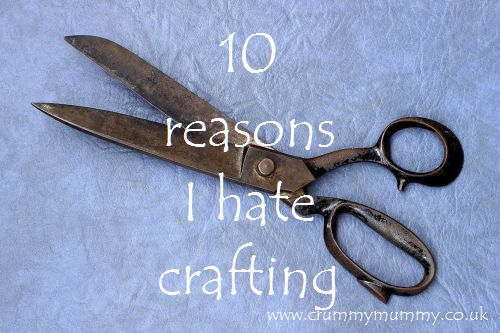 Hating crafting is quite ironic given I’m actually quite a creative person – give me a mixing bowl and some ingredients and I’ll happily bake you something nice to eat – but crafting? Nope.

1. We have cream carpets. Enough said.

2. You need bucket loads of patience. And patience isn’t one of my virtues.

3. Nine times out of 10 it ends in tears (the kids – not mine, although to be fair I’ve been close on more than one occasion). If you’ve got a perfectionist who wants the end result to look exactly like it does on the box crafting can be a Very Bad Idea.

4. It bungs up the vacuum cleaner. Stray feathers, rogue beads and errant pipe cleaners – prepare to break nails getting them out of the brush bar. (See my essential cleaning hacks for lazy mums).

5. Glitter. Once you’ve opened a pot of glitter you’re never, ever quite rid of it. It’ll wink at you on the carpet when you’re vacuuming, it’ll wink at you from your cheek when you look in the mirror three days later and as for getting it out of their hair – good luck with that.

6. Glue. Glue that doesn’t stick, glue that does stick and glue that sticks one part of whatever it is you’re making, but not the other. Give. Me. Strength.

7. ‘Tools’ that are never up to the job. The plastic needle that breaks on the second stitch, the paint pots containing paint that’s already dried up, the jewellery kit with elastic that snaps – I swear someone somewhere is laughing at us.

8. The bits. As well as the aforementioned feathers, beads and pipe cleaners gamming up the hoover, there’s also all the bits you inadvertently tread on or have to peel from your bare feet. Nice.

9. The mess. They’re quite happy making it, but they never want to help you clear it up, do they?

10. The aftermath. I’m referring of course to the ‘work of art’ you’re left with afterwards. The plaster of paris Minnie Mouse who looks like she’s been punched in both eyes, the pom pom with an unfortunate habit of moulting – is it wrong to make these things ‘disappear’ as soon as you think you can get away with it?

Are you a home crafter or are you happy to leave these things up to school and nursery like me? I’d love to know which camp you’re in!