10 reasons we had it better than our kids

They say kids today don’t know how lucky they are, but I beg to differ.

It occurred to me, as I opened a packet of pink wafer biscuits and was immediately struck by their decidedly underwhelming colour (they looked like they’d been drowned) that so many things today just aren’t what they used to be when we were young. 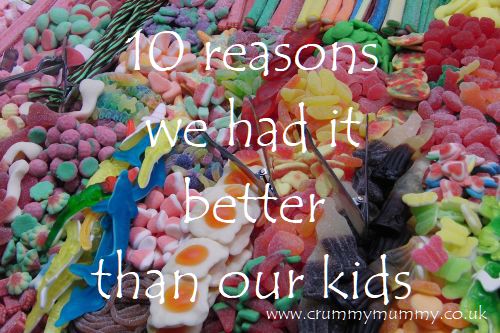 I’m sure pink wafer biscuits used to be bright pink, the sort of Barbie pink that says ‘I’m-delicious-eat-me-now’.

Now they’re a rather muted shade of old ladies slippers (you know the ones), faded and blanched and tired. A bit like me.

I’m assuming it’s down to the health police because no doubt pink wafer biscuits were filled with all sorts of nasties in order to achieve that I’m-delicious-eat-me-now Barbie appearance, but still. It seems such a loss to biscuits.

This got me thinking that while I don’t think we have it easier as mums there are many ways in which we had it better than our kids in childhood. Still smarting from biscuit-gate I asked some fellow bloggers what other things aren’t the same as they used to be and here’s what they said.

10 reasons we had it better than our kids

1. Playing outside until the street lights come on. “Nobody worried where you were and neighbours all looked out for each other,” says Laura at The Mamma Fairy.

2. Conkers. “I used to bake mine on my mum’s advice and loved winning! Now the cheating would be called out and they wouldn’t let you play in some schools on the off chance someone got injured. These things are what memories are made of,” says Kate at Kate On Thin Ice.

3. Walking to school. “I used to walk myself to school at the age of six and take a train and a tram by myself to get there by the age of nine,” says Kati at How To Rock At Parenting.

4. Three legged races. “They’ve banned it at my daughters’ school now due to health and safety!” says Laura at Five Little Doves.

5. Winning at sports day. “A lot of schools now award every child for taking part,” says Cheryl at Mummy of 5 Miracles. (I so don’t see the point of non-competitive sports days!)

6. Seat belts. “When we were kids and went on a day out we’d all pile in to a friend’s car and there would be about six kids sitting in the back. I’d always be the one sat on someone’s knee in the middle!” says Jennifer at My Mummy’s Pennies.

7. Polly Pocket. “She’s now about 10cm tall instead of 1.5cm. I used to love the little playsets, but at least I suppose they aren’t a choking hazard anymore,” says Gemma at Somewhere After The Rainbow.

9. Pick & mix penny sweets. “Now you have to have them pre-bagged. I think they’re worth the germs!” says Sophie at Mama Mei.

10. Bonfire night. “I went to a bonfire night when I was younger and there was a strip cordoned off right down the middle of a huge crowd of villagers. The organisers used this central strip to fire a rocket down and light the bonfire. No way you would get away with that now!” says Kirsty at Winnettes.

Is there anything you’ve noticed that just isn’t the same as it used to be? What do you look back on especially fondly? I’d love to hear!