The REAL difference between baby girls and baby boys 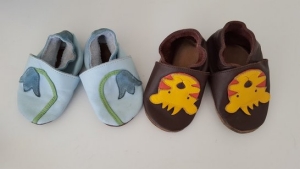 I know they say no two babies are the same, but BB and Little B couldn’t be more different. While BB was as good as gold – compliant, undemanding and easy to please – Little B is the total opposite. In every possible way. I’ve come to the conclusion that this is a gender thing, because I simply can’t imagine a girl being the way he is, and I can’t imagine a boy being the way BB is.

I’ve been making a mental note of the differences between them over the past few weeks in order to collate a definitive list of the REAL difference between baby girls and baby boys. Of course this list is in no way scientific, or based on a representative sample (we’re talking a grand total of two), it’s purely based on my own (limited) experience.

1. Strangers mistake baby girls for boys, but not baby boys for girls. What’s that all about? If I had £1 for every time someone mistakenly referred to BB as a boy even though she was quite clearly dressed as a girl I’d be a lot richer than I am now. Whereas no-one has ever mistaken Little B for a girl. Even though, with his curly blonde hair, blue eyes and long lashes he looks more like a girl than she did.

2. Boys like a good grope. When I fed BB she would tuck one hand neatly between my boobs and get on with the task in hand – drinking her milk – but Little B’s hands rove all over the place, copping a feel of whatever he can. Mainly my other boob.

3. Changing a baby girl’s nappy is so much easier than changing a baby boy’s. A boy’s nappy can lead to wee in your eye, hair or even your ear, whereas if a girl goes while you’re changing her it simply collects in a little puddle on the mat. Then there’s the matter of a certain something that – rather alarmingly – can pop up unexpectedly. I don’t think I’ll ever get used to that.

4. Girls’ baby clothes are so much nicer than boys’ baby clothes. While BB had endless little outfits in all manner of colours, styles and designs from an endless stream of shops, the choice for boys is, at best, underwhelming. Be prepared to hunt down a line you really like and stick with it.

5. Boys are a nightmare in public. If I took BB to a coffee shop when she was a toddler she would sit quietly in a chair and eat whatever it was I bought her until it was time to go. Little B will make a bee-line for the nearest door or flight of stairs (whichever is the most dangerous), run into the loo if the door has been left even slightly ajar in an attempt to bang the nappy and sanitary towel bin lids or run as far away from me as he possibly can. Or all three.

Perhaps I’m wrong and girls like a good grope and a public toilet nappy bin lid as much as the next boy, but I suspect not.

What do you think? Are baby girls different to baby boys?