Should you take a child to a funeral? 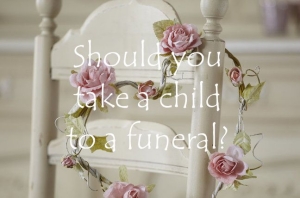 We had some sad news this week. BB and Little B’s great grandad – Misery Guts’s grandad – died. He was in his 90s and had been unwell for a while so his death wasn’t entirely unexpected, but it’s still a shock when it actually happens.

The question now is whether we take BB to his funeral. Little B will be coming, but at 16 months old he’ll be too young to remember.

Misery Guts thinks we shouldn’t, because he’d rather protect BB, who’s four, from ‘that sort of thing’ for as long as possible, but I disagree.

I think not involving her in the funeral is potentially more confusing than taking her because it doesn’t help to explain what happens when someone dies, and poses more questions than it answers (like the day she asked me what a graveyard was). If she doesn’t come it will seem to her that one minute someone is there, and the next minute they aren’t.

Whereas if she comes and sees the coffin and sees everyone mourning and saying a prayer, I think it will help her understand what has happened, and better prepare her for life ahead.

But Misery Guts – who’s the type of person to bury his head in the sand rather than face up to things – doesn’t want to expose her to a coffin, or the emotions of a funeral service, because he remembers being horrified the first time he went to a funeral, aged 10.

But I think the longer you put it off, the worse it’s going to be.

What do you think? Should you take a child to a funeral?