‘Nobody wants to be the kid who does a number two in their pants’. Those were the words of BB’s reception teacher when, you guessed it, she did a number two in her pants.

Her teacher wasn’t being nasty; she was simply stating a fact. We probably all remember the kid who did do a number two at some stage during our school years, and let’s face it, pooing your pants is not something you want to be remembered for. 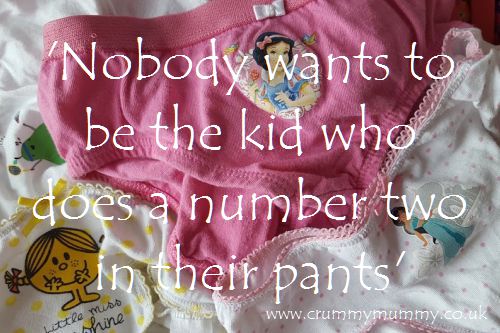 Kids instinctively seem to know this, which is why, when the p-bomb does happen at school, it’s not surprising if they a) don’t want to admit it and b) don’t want to talk about it.

I know this because despite having been 100% toilet trained for almost two years by the time she started school BB started having ‘accidents’ within two weeks of starting in reception. And they were never of the number one variety, either. They were always number twos, worst luck.

So what can you do about it? While turning a blind eye and hoping it’s a phase that will pass may sound like the easiest option, having been there, done it and dealt with the number two I’m of the opinion it’s probably best to face the situation head on.

1. Talk to them about it. They might be embarrassed and not want to talk about it, but the old saying is true: a problem shared is a problem halved. Just letting them know it’s ok, you’re not cross and you’d like to help them goes a long way to getting to the root of the problem.

2. Talk to the teacher about it. Having talked to BB it quickly transpired that she thought she was the only child having accidents at school. Having talked to her teacher it quickly transpired that in fact lots of children were having accidents too – she simply dealt with them so discreetly that none of the other children noticed. The relief on BB’s face when I told her this was plain to see, and she was no longer frightened of going to tell her teacher if and when an accident happened.

3. Try and identify a pattern. Do the accidents tend to be in the morning, in the afternoon or after lunch? If a pattern does emerge something as simple as asking the teacher to remind them to go to the loo at these times might be enough to nip it in the bud (this is ultimately what worked for us).

4. Re-instate the number two chart. If you used a chart with sticker or prize rewards when you were first getting them to do their business in the loo, reintroduce the idea to encourage them to work towards not having accidents during the day. Andrex has a downloadable star chart featuring all the days of the week and you’ll be surprised what the promise of a chocolate bar on Friday can achieve.

5. Don’t over-think it. Having accidents at school probably is a phase that will pass. I had no idea that toilet training regression is an actual ‘thing’, and perfectly normal. Remember life as they know it has just been turned upside down – there’s new people, a new environment and new routines to get to grips with – which is a lot for anyone to contend with let alone a four or five-year-old.

Has your little one just started school? Do you have any top tips in the toilet department?

This post was written in conjunction with Andrex as part of their Andrex School Readiness campaign. Apparently 63% of parents don’t think their children are ready to go to the loo alone when they start school, so they’ve developed the Andrex Clean Routine to help. They’ve got some great advice and tips which are worth a look!


Error: API requests are being delayed for this account. New posts will not be retrieved.