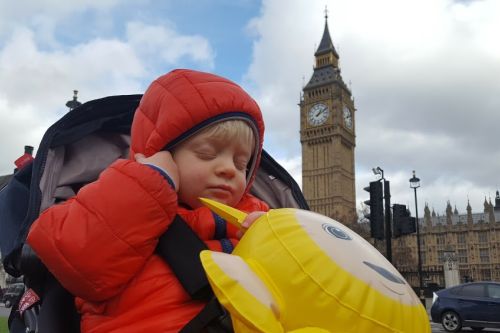 Social media followers will know that this week we were invited to the 20th anniversary birthday party of the Teletubbies at the British Film Institute in London. It was seventh heaven for Teletubbies fans like Little B, with the premier of an episode from the new series which starts on CBeebies next week, an appearance from the Teletubbies themselves and lots of fun and games. It also made me take back everything I’ve ever said about Topsy & Tim’s mum. Little B was asleep within minutes afterwards, and I took this picture outside Big Ben on our way back to the station. We live by the sea where it’s often very windy, and Little B always instinctively holds onto his hood – even when we’re not at home and he’s asleep! I love this photo because it really sums that up.