You guessed it. I’m talking about the man who parks in parent & child parking bays at the supermarket even though he’s not a parent and he doesn’t have a child.

Or should I say the total ar*e who parks in parent and child parking bays even though he’s not a parent and he doesn’t have a child. 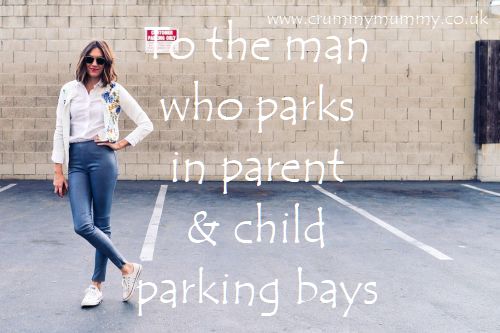 I know barely a week goes by when you don’t read a story about angry parents up in arms about motorists flouting the parent and child parking bay rules at supermarkets, but what really riled me about the latest story to hit the headlines is the brass neck of the culprit in question.

‘Andrew’ (he doesn’t have the balls to reveal his surname for fear of ‘retaliation’) from Cheshire told national newspapers the reason he parks his Chrysler in the spaces reserved for parents with children at his local Sainsbury’s is because it would get ‘dents from old grannies’ if he parked in the normal spaces, and using the parent and child spaces is the only way he can make sure his precious car won’t get scratches.

An angry parent left a note on his windscreen pointing out he was parked in the wrong spot but instead of acknowledging his mistake and parking somewhere else he decided to take to a national newspaper to call them petty.

I always take people to task when I catch them getting into or out of a car in these spaces when they clearly don’t have a child with them, most recently when I was almost a week overdue with Littlest B.

I had both BB and Little B with me and owing to all the parent and child bays being taken I had to park on the far side of the supermarket car park.

After squeezing myself and my massive belly out of the crevice between our car and the one parked next to me I then had to squeeze BB out of the back and hope she stayed standing where I told her to as cars rolled by and I squeezed Little B out of the other side.

We then waddled (ok I waddled, they walked) across the busy supermarket car park only to get to the store entrance to find a perfectly able lady and her husband without a child getting back into their car in the closest parent and child parking bay to the shop.

I was livid, and I told her so.

In this woman’s defence she was very sorry and apologised profusely, and it’s probably safe to say she won’t park there again.

But ‘Andrew’ appears to be so utterly without remorse, understanding or basic human decency (a bit like the man who wouldn’t give me his seat on the bus) that I doubt a tirade from an angry, hormonal, overdue mum like me is going to make any difference.

So I just have this to say to him:

What do you think? Have you ever taken anyone to task about parking in parent and child parking bays when they haven’t got a child with them? Do you think supermarkets should do more to police these spaces?