I’m sick of sticking suckers on the window at bedtime 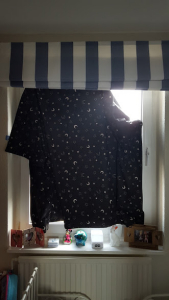 It’s been several weeks since we put the finishing touches on BB and Little B’s shared bedroom, but there’s one thing still bothering me: the window. When we moved in I bought a travel blackout blind to stick on the glass until we got a ‘proper’ one installed (it’s a funny shaped window so not straightforward) but now it’s almost three years later and of course we’ve never got round to it.

Every bedtime one of us stands on BB’s bed sticking the dratted suckers onto the glass, and every night I make a mental note that we need to get it sorted. The blind we’ve got is also in such a sorry state – there are only a handful of the rubber suckers left on it owing to Misery Guts yanking it off in the morning (I’ve given up telling him you’ve got to climb on the bed and carefully peel them off) so it hangs with drooping corners and gaps that let the light in.

Because we’ve already got a roller blind up I’ve started looking at what can be fitted to the actual window, and the ideal solution would be a built-in blind. I had a look at VELUX expecting to find bog standard black out blinds – which Misery Guts would say is all we need – but did you know you can get Disney ones? 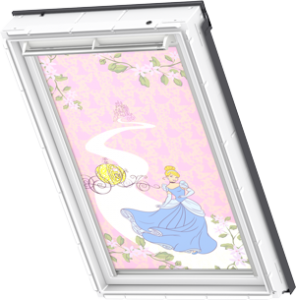 Winnie the Pooh, Bambi, Mickey Mouse and the Princesses, they’re all there and you can have them made to the size and shape of the window.

I haven’t shown BB yet because she’ll want the Princesses, and although Little B is too young to voice an opinion a more unisex option would be better.

I haven’t shown Misery Guts yet either because being generally miserable he’ll probably say no, but, like when I sit down with the Lakeland catalogue and fold over the tops of the pages featuring all the unnecessary kitchen gadgets I’d like (did you know they do an anti-gravity cake topper?), I can dream… 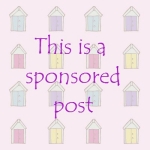