‘Give mums paid breaks to breastfeed at work’. That’s the recommendation of a new report which blames the UK’s ‘unhelpful culture’ on the fact we have the worst breastfeeding rate in the world.

The World Breastfeeding Trends Initiative reckons mums who choose to breastfeed should be allowed breaks to either pump milk or pop out to breastfeed their baby over and above their official breaks. 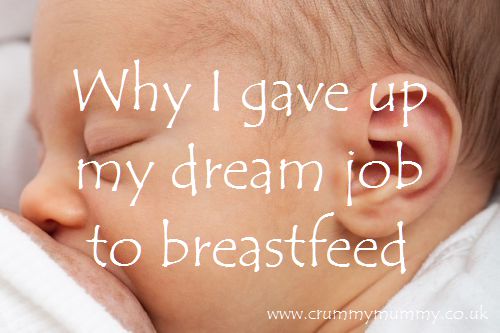 When Little B was just three months old an opportunity came up for me to work on the features desk of a national newspaper – one I had had my sights set on for years.

It couldn’t have come at a worse time, but it was one day a week at weekends and I was sure I could make it work.

It turned out I couldn’t. And all because I wanted to exclusively breastfeed.

It wasn’t that the newspaper in question wasn’t accommodating – the fact I needed breaks to pump milk was fine – but those ‘breaks’ (anyone who breastfeeds or pumps will tell you it’s tiring business) weren’t in addition to lunch and coffee breaks, they were instead of.

1. Sitting on a closed toilet seat to pump milk as fast as you can knowing your colleagues are all hard at a different kind of work is not conducive to the relaxed atmosphere needed to empty a boob.

2. Getting stressed about the fact everyone else is working while you’re not (except, of course, you are – you’re making your baby’s sole source of nourishment) means it takes even longer than it otherwise might to get the necessary milk out.

3. Spending all your official breaks pumping means you don’t actually get a break during the working day at all.

4. Not emptying your boobs properly owing to missing a pumping session due an ill-timed meeting or being in the wrong environment led, in my case, to a nasty bout of mastitis. Which, quite apart from meaning you’ll be off work, in pain, bed-bound and on antibiotics that will pass through your milk to your baby, doesn’t do anyone any favours.

5. Spending all week trying to pump enough milk to leave while I was at work (and extra, just in case) while at the same time giving my baby his normal feeds was exhausting and became so stressful and time-consuming it would keep me awake at night.

6. After a few months of this enough was enough. I didn’t need this job, I wanted it. And, of course, it wasn’t about me, it was about my baby.

So I decided to work from home until I stopped breastfeeding. I still write for the newspaper in question, just not from a desk at the beating heart of their busy London newsroom (I’m not bitter, honest!)

Could I have ‘had it all’ – my dream job and been able to breastfeed my baby – if I’d been able to take additional breaks to pump milk? I don’t know, but what I do know is it would have taken the pressure off.

Of course this latest suggestion by the World Breastfeeding Trends Initiative has been met with all manner of criticism.

Of course allowing breastfeeding mums extra breaks to pump or nurse during the working day is going to have an impact on a business, of course taking extra breaks is going to be easier to organise in an office environment than it is for cabin crew or someone working on a shop till and of course there are going to be those who say it’s not fair nursing women should be given extra time in order to do this (although frankly, the time a woman needs ‘off’ to breastfeed or pump during her career is nothing compared to the time smokers must accrue in breaks over the course of their career) but unless we do something then the fact that less than 1% of babies in the UK are breastfed until they’re one-year-old isn’t going to change.

We’re constantly being told ‘breast is best’ so stop telling us what we should be doing and help us to actually do it!

What do you think? Would you be happy if a colleague took extra breaks in order to pump milk or breastfeed her baby? Do you run a business and would nursing women taking extra breaks be a logistical nightmare? I’d love to hear your thoughts!