I’ve been called many things in my time, but never a thief.

That’s what Anna May Mangan, the author of THAT Daily Mail article, called me when we came face to face for the first time. On live TV. 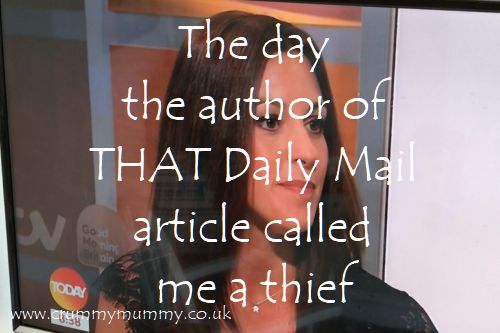 If you’re unfamiliar with the Daily Mail article to which I’m referring Anna recently took it upon herself to name and shame certain mummy bloggers for daring to document the trials and tribulations of motherhood in a withering attack on mums like me, and the story went viral.

Here’s a link to the feature if you missed it – I don’t mind linking to it because it only serves to raise the profile – and click throughs – of the bloggers in question. Anyway, I digress.

Now the mummy blogger basher reckons I’m a thief for escaping to coffee shops a couple of days a week in a bid to make working from home with kids work and having the audacity to plug in and connect to their (free) wifi.

And she told me so on live breakfast TV in front of more than one million viewers.

I was asked to appear on ITV’s Good Morning Britain to debate the issue of so-called ‘café campers’ and explain why I’m proud to be one alongside Anna who says home workers like me are ‘thieves’ for ‘loitering without intent to spend enough money’ and ‘monopolising the best seats’ in coffee shops.

I won’t go into why I support those who choose to work from coffee shops – or find it’s the only way to make things work when juggling parenthood – as I explained all that in my last post.

The point is I had a chance to ask Anna about THAT Daily Mail article…but I didn’t.

As a tabloid journalist myself I know that the article as it appeared isn’t necessarily what she filed: it will have been through several editors who may have ‘tweaked’ it, and she wouldn’t have been responsible for the headline, sensationalist bullet points or the pulled quotes either.

On more than one occasion I’ve looked at the end result of a story I’ve written and thought ‘did I write that?’ because while not technically wrong it’s been edited to within an inch of its life to the point I barely recognise it.

Even so, in the case of this article, I don’t think the writer’s original intention was lost – Anna made her feelings plainly clear. So why didn’t I confront her about it?

In my defence live TV is all a bit of a blur: you’re taken to the studio just before you’re due to go on air, you’re whisked into hair and make-up and in the case of debate-style features you’re generally kept away from whoever it is you’re going on air with so your best argument is saved for telly.

Then by the time you come off air your car is waiting to pick you up and that’s that. So what I’m basically saying is that I didn’t get the chance. But in hindsight I wished I had.

On the up side, despite being called a thief on national TV, Eamonn Holmes sided with me (I told you he was super nice!) and reckons with three kids at home I’m quite right to make coffee shops my pop up office.

Unfortunately the debate isn’t on the ITV hub, otherwise I would share it here, so all I’ve got is this (rather dodgy) recording by Misery Guts with the kids in the background, last night’s nappy hanging between Little B’s legs, demanding Thomas the Tank Engine instead. Which, despite what Anna says in her infamous article, is the reality of motherhood.

Did you read THAT Daily Mail article? Would you confront Anna about it if you had the chance? Do you think I’m a coffee shop thief? I’d love to hear your thoughts!