Today’s babies are more likely to be weaned onto rice cakes and avocados if the latest research by baby snack brand Kiddylicious is anything to go by. 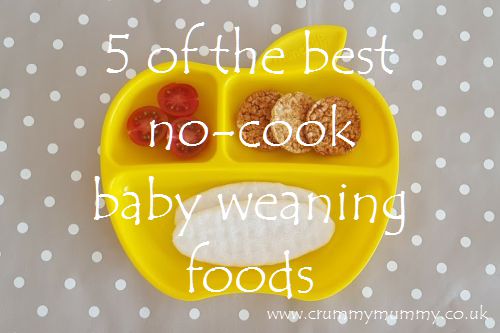 Apparently 18% more children are being given rice cakes as a first finger food than they were 20 years ago, while 17% more babies are fed avocado and 22% more are eating sweet potato.

Rice cakes and avocado were go-to foods for me when BB and Little B were weanagers, and no doubt they will be again when I introduce Littlest B to solids later this year.

But while the parents surveyed in the Kiddylicious poll said the reason they’re giving their kids more ‘exotic’ food is to make them more adventurous and less likely to be fussy eaters, I’m afraid my reasons aren’t so noble.

Basically I gave them things like rice cakes and avocado because I didn’t have to cook them.

Indeed that’s one of the reasons I went down the baby led weaning route in the first place – laziness. Not only do you not need to cook many of their first finger foods, you don’t need to sit there feeding it to them either. Freeing you up to do something else.

Admittedly there are also cons – the mess can be incredible, and the potential for choking isn’t for the faint-hearted – but overall I’d say baby led weaning is far preferable to slaving away in the kitchen only to puree what you lovingly created to within an inch of its life and then sitting there spoon-feeding it to them.

So if you’re considering baby led weaning and are wondering where to start I thought I’d share my 5 favourite no-cook baby weaning foods.

1. Avocado. This was the very first food I gave both BB and Little B when I introduced them to solids at six months. It’s perfect because cut into slices avocado is firm for them to hold and grasp, but as soon as it enters their mouth it turns to mush. It’s also really versatile – as well as avocado fingers you can also spread it on toast and rice cakes. (Don’t be alarmed by the state of their nappy afterwards though – it’s totally normal. I think.)

Let weaning commence! We’re starting off with avocado – think he likes it! Follow our progress over on the blog… #babyledweaning #green #SnapHappyBritMums

2. Rice cakes. On their own or with something like avocado spread on top, rice cakes make a great baby weaning food. You can get big ones, small ones, round ones, square ones, plain ones, fruit ones, marmite ones – the list is endless. Plus they’re a great on-the-go snack to keep in the nappy bag too.

3. Kiddylicious wafers. Made with rice flour Kiddylicious wafers are a less sugary version of traditional rusks, with the added bonus of being mess free so no chiseling the remains off the high chair afterwards. They come in blueberry, banana and carrot flavours and have real longevity – designed for babies aged six months and up I also give them to BB (aged five) and Little B (aged two) to eat in the car on the way to school and nursery in the morning when we’ve run out of time at home.

4. Hard cheese. Cut into sticks big enough for them to hold, hard cheese is not only a source of protein but a great baby weaning food because they can lick it, bite it or chew it. I’d go for a mild cheese rather than a mature one until their tastes have developed.

5. Mango. It’s bright, colourful and tasty and like cheese can be cut into sticks and sucked or chewed. I once peeled a small mango and gave it to BB, who promptly ate the lot and handed me back the stone.

Did you or do you feed your little ones any of the above? Do you find no-cook foods the best because they free you up to do something else?

Kiddylicious has launched a new campaign celebrating the wafer moments had by babies, families and friends and they’re asking mums and dads to share their #wafermoment – including what they get up to when their little ones are busy eating wafers – to be in with the chance of winning a host of prizes!

I’m proud to be working with Kiddylicious as a Kiddylicious brand ambassador. As always all opinions are my own and I would never recommend or endorse a product I don’t truly believe in.