Have you heard about the mum who live vlogged her birth and shared it with all and sundry – by which I mean more than 200,000 people – on Facebook and Channel Mum?

I kid you not, Sarah-Jayne Ljungstrom broadcast her labour from start to finish in not one, not two, but five separate vlogs as her baby ‘moved down the birth canal’. 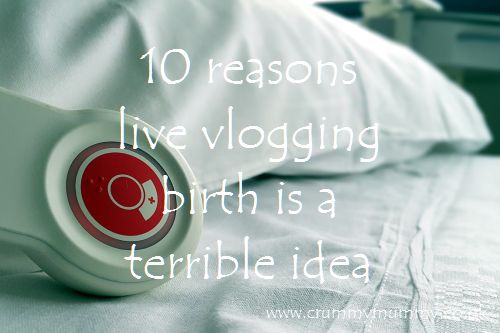 As a fellow blogger I totally understand how all-consuming and compelling blogging can be, but is nothing sacred anymore?

Rest assured people, I will not be following in Sarah-Jayne’s footsteps when I give birth in a few weeks’ time, and here’s why.

1. Showing the world your foo-foo when you haven’t actually been able to see it yourself for the last few weeks – or months – is surely unadvisable. Trained medical staff are one thing – they’ve seen it all – but complete strangers? No no no no no.

2. No-one wants to picture you dilating. Admittedly Sarah-Jayne didn’t actually show off her foo-foo, but she did give viewers regular updates on how dilated she was. Who on earth wants to visualise that?

3. What if you throw up? As well as your neglected foo-foo, no-one wants to see you chucking up last night’s biriyani – or whatever you ate to try and get things going – either.

4. What if you wet yourself? You can try and pass it off as your water’s breaking, but we’ll all know the real truth.

5. What if you do a blow off? Or five? Anyone who’s had a baby will tell you there’s absolutely no controlling what goes on down there when things get serious, and like the puking no-one is going to want to hear you parp.

6. What if you do a poo? Or five? For the same reasons listed above this is a very real possibility, and while watching an unwitting dad-to-be with a net might be funny in films and in theory, it’s unlikely to be quite so amusing when broadcast through your Facebook or YouTube channel.

8. Think of your digital footprint. Do you really want a future boss or your bundle of joy’s future spouse able to access footage of you puffing, panting and parping your way through labour?

9. It’s taking things too far. No doubt live vlogging her birth has been brilliant for Sarah-Jayne’s stats, not to mention her social media profile, but really? When it comes to over-sharing this is surely it.

10. What will your new arrival say when they’re old enough to understand? You’re at risk of scarring them for life.

What do you think? Did you see any of Sarah-Jayne’s footage? Would you ever consider live vlogging your birth, or is it taking things a step too far?